Have you ever been bewildered by the tons of complicated terms within the realms of live video streaming? Well, we know that between RTMPs, encoding, and bitrates, the live streaming jargon can get a little too confusing. Luckily, the experts at OneStream have put together a glossary of all the fancy tech-savvy and most commonly used live streaming terms for all levels of live-streaming professionals.

Adaptive bitrate allows the stream to adjust itself to the streaming device’s video specifications and speed. This means if the viewer's internet is slow, the stream resolution is automatically scaled down to 720p or 480p, etc.

If you plan to stream on Facebook or YouTube those platforms recommend a video resolution no higher than 1080p. So to comply with their restrictions we will automatically reduce your video resolution to 1080p.

AAC is a compression format, just like MP3, that facilitates increased sample frequency and offers higher quality audio for your live video streams.

This is the amount of data offered by live streaming platforms to the streamers to stream their content. The more the bitrate, the higher the resolution, and the higher the required bandwidth.

OneStream gives 2 Terabytes to every multicast user with the professional plan for the Embed player. Since the bandwidth majorly relies on the number of viewers watching the live stream, OneStream renews the bandwidth to 2TB on a monthly basis. OneStream also provides a bandwidth add-on in case extra bandwidth is required.

Bitrate is the number of bits processed per second of the video. Simply put, it is the amount of data transferred per unit of time in a video. Hence, a higher bitrate means higher resolution and higher quality of the video.

OneStream can push up to 12000 kbps bitrate and recommended is 1500-6000 kbps. You can maximum live stream at 1080p and 720p for YouTube. Whereas, scale-downing your video to 5000 - 6000 kbps will not affect your video at all. The difference would be hardly noticeable by the naked eye, therefore you can easily scale down your video bitrates.

Buffering is the time lag between collecting video data and delivering it. Buffering occurs when the video is collecting additional data to play it properly and in high resolution. Slow internet speed is a lead cause of buffering.

In pre-recorded live streaming, the buffering occurs in case the video doesn’t follow the recommended video specs. For real-time live streaming, your internet should be fast and stable and the nearest server should be chosen from the streaming location on OneStream dashboard. Wrong present settings of the third-party app may also cause buffering.

Closed captions are essentially the subtitles added to the video streams as a text overlay. Akin to transcription, closed captions assist the hearing-impaired viewers or those who prefer to watch videos without the audio.

A codec is a program or a device that is capable of encoding or decoding a digital piece of information, both audio or video, for easy transmission over the internet.

Although OneStream can push different video codec if scheduled at least 10 mins in the future, the recommended codec is H.264.

Also referred to as video compression, it is the process of reducing the total number of bits needed to represent an image or video sequence. It is usually performed by special programs using video compression algorithms that reduce raw data by as much as a thousand times.

CDNs are a geographically distributed network of servers and data centers placed globally to facilitate the fast delivery of digital content. The video content from the streamer is transferred to the closest server, after which the cached content is delivered to the viewer.

A DVR is an electronic device that allows recording video in a digital format and stores it on a hard drive. It converts the analog signals captured by cameras into digital signals and stores them on the hard drive after compression. YouTube's DVR feature allows the viewers to pause, rewind, and play the live stream from any point. Once the viewers resume playing, the live stream will start from where they have hit pause, so they won't miss any part of the stream.

Encoders are devices used to convert the video format of the source video into a compatible format that is playable on all devices. They also allow the streamers to use various bitrates to increase the reach of their devices.

Although OneStream is capable of handling most kinds of mp4, mov, m4v, webm and mkv video files, it is recommended that the following video settings are used for best live streaming results when streaming via OneStream:

In case, your video does not have the best-recommended settings then you can use any encoder such as Handbrake and Adobe.

Encoding is the most significant part of live streaming. It takes your stream and converts it into a file that can be streamed across the internet. Encoding is typically done using a third-party streaming software such as OBS or with a hardware encoder (discussed above).

This is primarily a security system that is designed to block unauthorized access while allowing authorized communications. However, if not configured properly, this can cause significant issues when live streaming.

HDMI is an audio/video interface used for transferring audio and video data to and from HDMI-compliant source devices. It is a common standard for connecting high-definition (HD) devices at the consumer level.

Latency describes the time difference between real-time and online streaming. It is the time that elapses from when the data source sends a data packet until the destination receives it. Since both times are never the same, different features are deployed to minimize live streaming latency.

The latency issue is mainly caused by the user’s location and load on the servers at the time of streaming. You can find latency by using the ping command here https://wondernetwork.com/pings/Helsinki. You can change the last string from Helsinki to your region to see the results.

Live streaming is the process of broadcasting video content over the internet instead of a satellite. The audience can watch the streaming content on their internet-enabled devices, be it their smartphones, laptops, or smart televisions.

These are devices that enable streamers to broadcast their video content online. They typically include an internet connection and recording equipment such as a video camera and microphone.

As OneStream offers a camera recording feature so the internal or external cameras can both be connected. Read More.

These are platforms that offer the servers and space to store and distribute video content. They also provide features like multicasting, streaming analytics, branding options, captions, subtitles, etc., to make streaming more engaging.

Also referred to as hard-coded or baked/burnt captions, open captions are a permanent video content feature. That is, they cannot be switched off.

OneStream allows adding open captions to your pre-recorded live streams by adding an SRT file. An SRT file or SubRip (.srt) file is one of the most common types of raw caption file formats. Read More.

OTT essentially relates to delivering video content (film and TV content) via the internet without requesting the viewers to subscribe to the traditional cable or satellite service. Netflix and Hulu are perfect examples of OTT services.

PiP is the ability to see multiple video sources simultaneously on one screen.

RTMP is the most common streaming protocol, initially developed by Macromedia for streaming audio, video, and data over the internet. It allows you to stream video content to popular streaming destinations like Facebook, YouTube, Instagram, and Twitch, using a stream key and URL.

OneStream supports RTMP streaming. You can connect any social media account with OneStream as long as you have an RTMP URL and stream key.

The extraction and dissemination of information, both audio and video, immediately is referred to as real-time streaming. The data is delivered to a messaging system in real-time, immediately processed, and sent to the streaming destination.

With OneStream, you can enjoy real-time streaming using a third-party tool. Read More.

Screen resolution is the number of pixels in x (width) and y (length) dimensions for any display device, such as monitors, mobiles, and televisions. For example, 1920 x 1080 means the screen is 1920 pixels in width and 1080 pixels in height. Essentially, the resolution is the size of your screen, so when you live stream, you configure a specific resolution to broadcast your video.

Stream key is the code used to identify the audio/video streaming source to embed the stream on the web. Your stream key is essentially the password that you need to stream your video to a specific RTMP server.

OneStream RTMP social account supports this feature. If you have the stream key of the destination platform you can connect it to OneStream for live streaming and embed your streams on the web. Read More.

VOD is a programming system that allows the viewers to select and watch their desired video content whenever they like, rather than tuning in at the scheduled broadcast time.

OneStream supports VOD. If you want your video to be deleted immediately after streaming, you can choose the Delete Stream/VOD option under Advanced Settings when creating a schedule.

Just like 720p or 1080p, 4K is a resolution for the video content. There are typically over 7 million pixels in a 4k video display.

Along with Saba Mohsin

Fizza is a digital marketer, driven by her passion for community building and social media growth. She is a strong advocate of combining creative digital solutions for vigorous customer engagement. 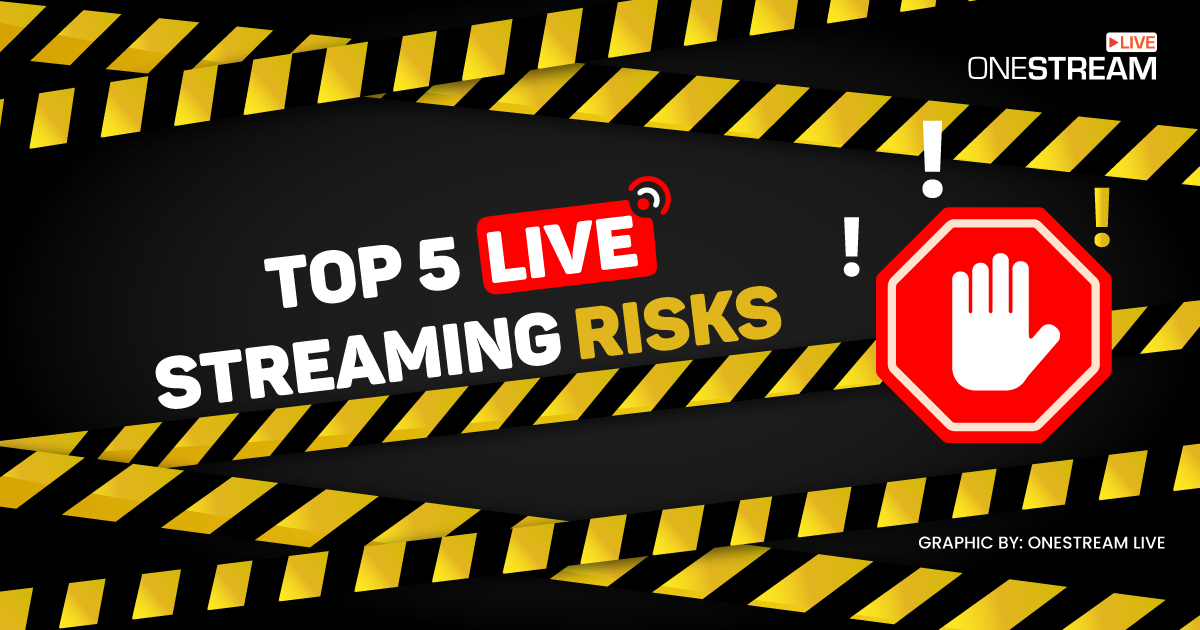 Top 5 Risks of Live Streaming you Should be Aware of 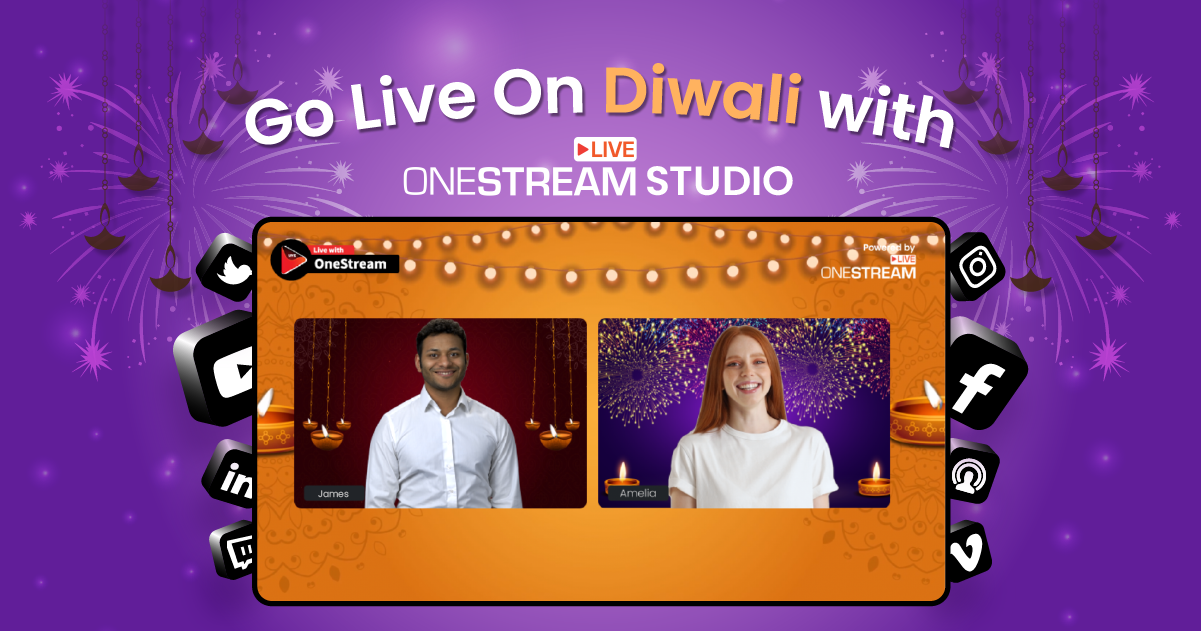 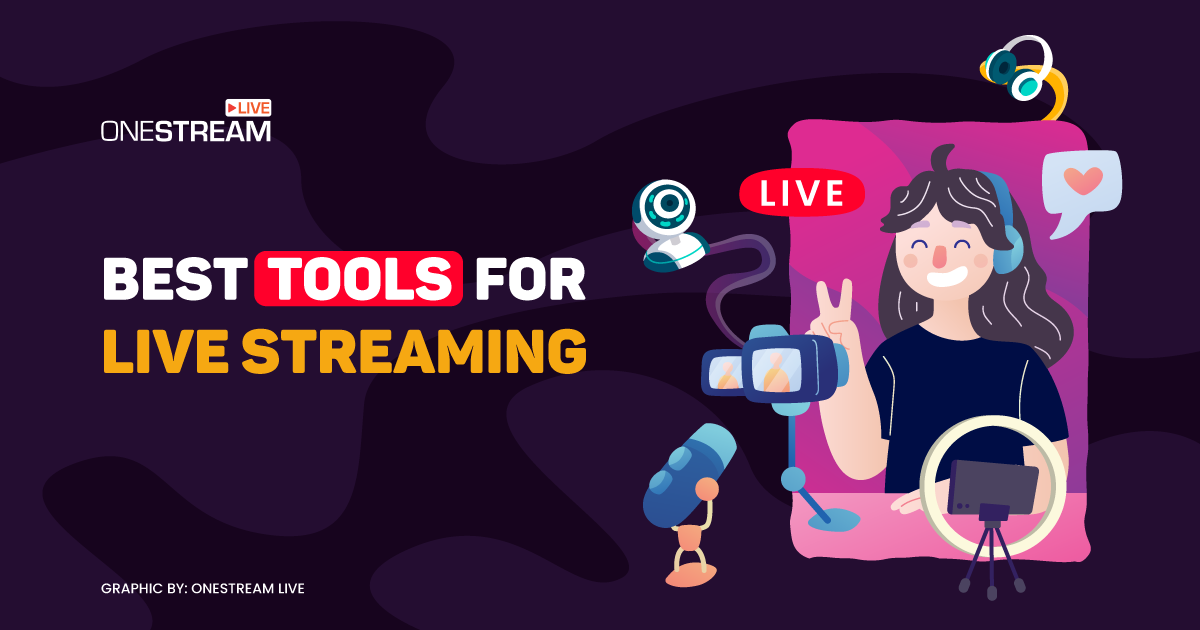 The Best Tools to use for Live Streaming